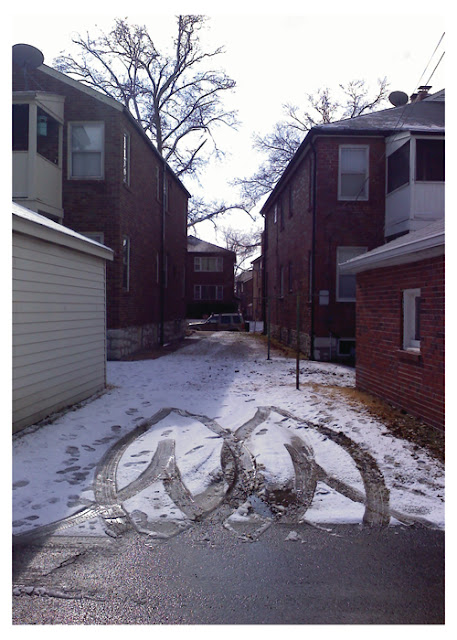 David Uthus lives in Chicago, a transplant from St. Louis. In these pieces his tool is what is always close at hand – the camera in his cell phone. The subjects of his pictures are the quiet, unnoticed ironies and puzzlements of the urban landscape photographed in passing: an unexpected pattern of tire tracks in the slush... a concrete parking block that has found its way to the top of a snow pile... a simple, bright rectangle of light under a restroom stall door. At first glance some of his pictures seem so plain that a viewer could reasonably wonder if there's been some mistake, that there's almost nothing there at all. But his subjects rise slowly to the surface. Viewed together, patterns emerge, a sense of the photographer's careful, thoughtful and slightly absurd view of the lowly and the discarded objects of the city emerges. L.A. photographer Kim Winderman's tools couldn't be more different. She shoots film, medium format, requiring a bit more planning in capturing her pictures and the work at Lula is black and white, but she too is asking us to pause and look at things our gaze might ordinarily pass over. Winderman has an incredible eye for intricate abstraction in natural forms. Slow and quiet, her pictures feel heavy with the play of light and darkness in more than just a visual sense. She says her work is about "Singling out moments...slowly and thoughtfully." Uthus might say the same thing about his.

The show opens at Lula August 14th with a reception from 6-9. Appetizers and cash bar. Come say hi.
Posted by Anders Brekhus Nilsen at 12:31 PM