Opening-- Tuesday, March 29, 2011 6-9pm
Please join us for the opening of the Spring Show at Lula Café which features paintings by two artists, Leslie Baum and Surabhi Ghosh.

If you can't make the opening come by any day to see this exhibition which runs through May.

In the dining room of Lula you will find Axis Mundi, a nonhierarchical presentation of paintings by Leslie Baum. This body of work addresses the idea of the image and the fracturing of image. The paintings depict a collaged space where no one formal element is privileged over another and include large oil paintings and watercolors on arches paper. Baum bases her compositions on the innocuous groupings of pottery shards and stones encountered at archeological sites in New Mexico. Her paintings place the image fragments in a neutral context and in front of an audience never imagined by those who created of the patterned pottery. While acknowledging the mystery of the original messages, Baum’s paintings present an opportunity to make new meanings and associations. 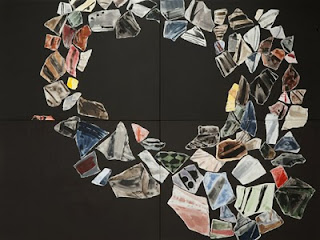 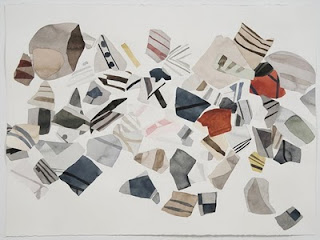 In the bar we have displayed the recent work of Surabhi Ghosh which centers on how pattern and decoration can act as meaningful though often unrecognized signifiers within spiritual, political, and domestic narratives. Through recurrent or systematic use, motifs become codes and patterns become language; only members of a community can fully understand their meaning. But in some instances a symbol (e.g., the circle) holds similar meanings across disparate locations and histories. Her work taps into these shared authorless codes and embodies the mysteries of connectivity found in decorative patterning. Focusing on circles, dots, and borders, she transforms the peripheral into the subject by filling the picture plane with meticulously detailed patterns, reclaiming decoration as valuable rather than disposable. The work of Surabhi Ghosh represents both the tangible and the unknowable while prompting viewers to concentrate on what is often overlooked or undervalued. 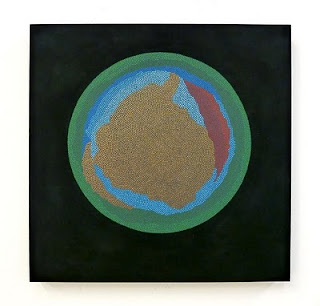 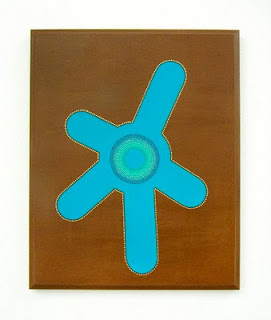 Posted by Anders Brekhus Nilsen at 11:43 AM No comments: