Lula is pleased to announce its 2014 Winter show, Project Astoria: Test One, photographs by Todd Baxter. Opening reception with the artist will be held Tuesday, December 17th, 6-9. 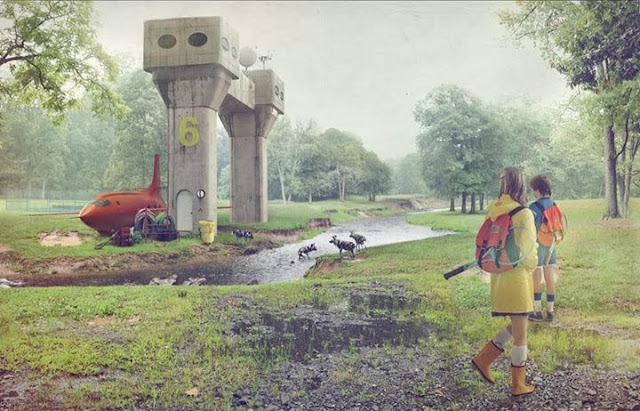 Project Astoria is an exploration of an imagined new planet and its moons, discovered hidden within our Sun's system by an amateur astronomer in Astoria, Illinois, in the 1920's. The moons, named for his daughters, are found to be habitable and are colonized by a co-operative multinational expedition from our own world in the mid 1970's. The images follow the moons' immigrants as they explore, adapt and create a new life in their strange new worlds. Moving between the surreal feeling of a fairy tale and something more comfortable and deceptively mundane, the Astoria Project takes Baxter's unique visions to an ambitious new level. Trained as a painter and collagist, Baxter creates lush, atmospheric, intricately constructed narrative scenes that feel at once strange and familiar. The images from Astoria are painstakingly and seamlessly assembled from location shots taken in places as close by as Kentucky and Washington and as far afield as Morocco, Hawaii and Guam. Astoria's inhabitants are shot in the studio with hand made costumes, or in the case of one giant snow creature, constructed from clay with a dog's fur applied seamlessly by digital means. The characters and stories are fleshed out by Baxter and collaborator Aubrey Videtto.
Posted by Anders Brekhus Nilsen at 3:45 PM 2 comments: